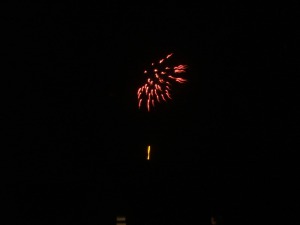 I took these pictures from my bedroom window on Saturday night.  I had the opportunity to watch four different displays from the privacy and warmth of my own home.  Unfortunately they were all on at the same time so I spent part of my evening running frantically from window to window to catch all the celebrations in remembrance of that bloke, Guy, and his fiendish plot to rid the country of something or other, a long, long, long, time ago.  History, eh?  Where would we be without it?

I’m such a child.

[God bless Guy, who was framed]

We had a new bus driver today.  No, that’s not strictly true.  She’s not new because she used to drive my bus sometimes when I lived in the Historic Market Town.  But the route is new for her.  And the bus isn’t supposed to leave the bus station till five-thirty.  She left the bus station at five-fifteen – *gasp* …

[see how interesting my days are?  i could tell you about the fight i had to break up this morning at work, or the telephone number i looked up so that i can arrange some civil ceremony with a date i have in mind, or the way i’m almost causing trouble at work, but no, instead i treat you to the delights of Bus News]

… which means that Pierced Tattoo Boy, Girl With Red Bag, Gay Boy, Peroxide Chav, Chap With Loud Music [but not the young one] and I Read The Sun ALL missed the bus.  And did myself, GayChav, or Annoying Bitchy Woman choose to do anything about it?   Did we ‘eck.  And there wasn’t going to be another bus for over two hours.

And I had a squeaky seat.

*squeak squeak squeak* – all the way home.  Like a little mouse.  And I couldn’t move because everybody would stare at me, not that there were lots of people to actually stare …

I’ll leave you with this from my primary school Weekend Diary from 7.11.83 [gosh, twenty-two years ago exactly, now who feels olds?] … I also went to a bonfire and saw about 30 fireworks.  Obviously my nine year old self wasn’t very impressed by them since I failed to describe them imaginatively …