I own two pairs of spectacles.  Designer spectacles.  Oh yes, only the very best for me.  I’m supposed to wear them for watching the tellybox, reading and using the computer.  Except I don’t and haven’t done so for, oooh, maybe eight months.  Due to the fact that my vision is vaguely not quite 100% at the moment I took the plunge and searched for them.

I found one glasses case.  No glasses.

And not finding them just makes me frustrated, thus creating a need to search for them even more, even though I’ve searched everywhere.

Still, at least I suddenly realised just how many bags I own and the amount of crap that stays in them months after they were last used.  Mouldy Polo anyone?  I need a Spring Clean.  But this will probably be after going to the opticians and spending vast amounts of money [on more designer glasses that will inevitably get lost in the realms of Nowhere], and just before the old glasses magically reappear.

Whilst emptying the washing machine of last nights washing this morning I discovered a pair of knickers that I haven’t worn in about four months.  Yep.

How about a random photo?  This is my brand new niece, Valerie, with her big sister Emily.  It’s such a shame they’re so far away … 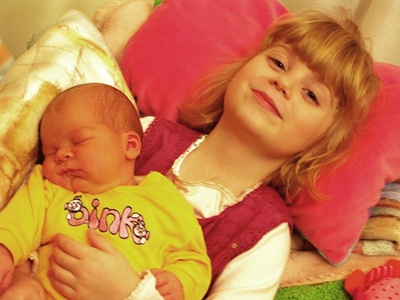 We had no Internet connectivity last night.  It made me wonder just what people got up to in the Dark Ages before the Internet existed.  I sat and twiddled my thumbs and fretted about how many junk emails I would have when I was able to check.  As it happens there were very few … *phew*